Identifying freshwater fish is a useful skill in a variety of situations, especially when you're getting ready to set out on a fishing charter.

And while we've covered the basics of freshwater fishing strategies, your approach is only half the battle — you need to know exactly what you're trying to catch, too. For fishermen, a good knowledge of their local freshwater fish species, including their characteristics and behavior, can be useful for two reasons:

There are three main categories of freshwater fish, divided by the kind of environment they favor: warm water, cool water, and cold water fish. In this article, we’ll discuss the characteristics of each of these habitats and the fish that live there, and you’ll also learn how to identify a few of the most common fish from each habitat.

Of course, before any fishing trip, you should check with your local fish and wildlife authority or other localized resources to read up on which kinds of fish you are most likely to encounter in the areas you’re fishing in. The more information you have, the better equipped you will be to catch the fish you want to, and to impress your friends and companions with your knowledge of those fish and their habitats.

Warm water fish prefer water around 80ºF; however, they can be fairly cold hardy and are found throughout the United States, even in northern states infamous for their harsh winters. In these states, warm water habitats are generally found at low elevations, and for still water bodies in particular, they tend to be smaller than cold or cool water habitats.

Their higher temperatures mean warm water bodies tend to be higher in biodiversity, says David Thomas from Everything Fishkeeping, which is great for fishermen, researchers, and the environment. It also means these bodies of water are more susceptible to the early effects of climate change. Many popular game fish call these warm water bodies home.

The largemouth bass is one of the most popular and sought-after sport fish in the world, being especially beloved in its native North America. They are known for being particularly aggressive on the line, which makes them a particular target as an especially fun fish to hook. In addition to this signature resistance on the line, largemouth bass are distinguished by their greyish-green coloration and namesake jaw anatomy, essentially a severe and distinctive underbite.

These are also notable for their large size, reaching weights of up to 25 pounds! 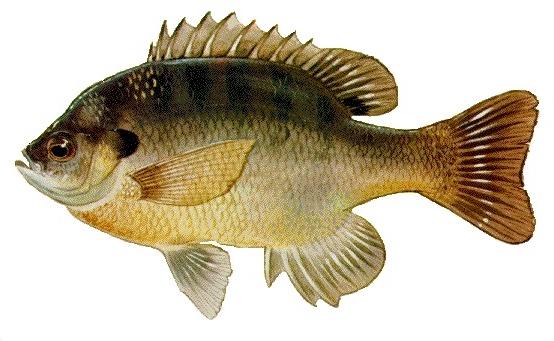 Bluegill are one of the most common species of sunfish; although their native range is east of the Rockies, across the American South and through the Midwest, their adaptability and popularity as a sport fish have led to their introduction across the country and the world. They are typically less than a foot long, with a round, flat body. Their faces tend to be a dark blue (hence their name), and they have a distinctive black “ear” on each side of their head.

Bluegill love to hide in shallow waters full of aquatic plants, so swampy areas and shady shorelines are your best bets for catching one.

Cool water fish are the indecisive middlemen of the classification system, defined by not being quite at the extremes of their warm water and cold water brethren. Cool water habitats slot right in between the two, and these fish thrive at temperatures between about 60ºF and 80ºF. These temperature preferences mean cool water fish are most common in the Midwest and some Northern states.

Walleyes go by many names, including yellow pike, across their range in the northern United States and southern Canada. In French-speaking Canada, they are called the dore, meaning “golden” – a reference to their most prominent color. Walleye are generally a yellowish olive or golden color across most of their body, with several darker saddles along their spine and their scales growing paler and even white closer to their bellies. This is a form of camouflage that allows them to blend in with the lake bottom when seen from above, and with the sunlight when seen from below.

Walleye can reach 20 pounds and almost three feet in length, especially in the southern parts of their range, but they rarely reach these sizes in popular fishing spots.

Although many fish in the United States are commonly called perch, the yellow or lake perch is the only true perch in North America. Their native range covers southern Canada and the northern United States, but their delicious meat and popularity as a sport fish has led to them being widely introduced elsewhere. They are, unsurprisingly, yellow, with a long, oval-shaped body and spiny fins, including two dorsal fins.

Cold water fish, unsurprisingly, prefer colder waters. They thrive in temperatures below 60 degrees Fahrenheit, and so are most common in the northernmost states. However, bodies of cold water can be found throughout the United States, including lakes and streams further south that experience frequent cold winds or sit at higher elevations. Streams and rivers that are fed primarily by snowmelt may also hold some cold water fish, even in climates that are not otherwise hospitable to them. Some of the most popular types of game fish are cold water fish.

Given their importance to the Alaskan ecosystem, and their starring role in the annual drama of brown bears feeding at the salmon runs in Katmai, it should be no surprise that salmon are cold water fish. They are also what’s known as anadromous fish, meaning they move between both fresh and saltwater environments. There are seven species of salmon that can be found in bodies of water across the northern United States, from the Chinook salmon in the Pacific Ocean to Alaska’s famous sockeye or red salmon to the East Coast’s sometimes landlocked Atlantic salmon.

Although most salmon are anadromous, some have adapted to live in freshwater lakes their whole lives, including several species that were introduced to the Great Lakes beginning in the 1960s to control other invasive species and provide sport for fishermen. Salmon appearance varies between the species, but they are usually silvery-grey when they aren’t in spawn and grow to between two and four feet long.

Trout are a close relative of salmon, and, as with salmon, the common name trout actually refers to a collection of closely related and physically similar species. However, there actually aren’t as many trout species in North America as you might think just by looking at them. Trout of the same species can develop wildly different colorations and physical characteristics depending on the body of water in which they live. All trout have spineless fins and an additional adipose (fatty) fin near their tail.

They are known for their bright colors and striking patterns, especially during spawning season. They mostly live in clear, cold lakes and streams across northern North America, though some species will spend significant amounts of time in the ocean as well.

Freshwater fish identification is an important skill for any angler or fishing charter, and will tell you which fish are good to eat, legal to keep, and more. Most importantly, knowing your fish will give you a much better chance of catching them.

Now, all that's left to do is book yourself a fishing charter, grab some fishing lures, and get out there!